The joy of giving

Why did a ten-year old boy experience that joy 55 years ago?   Why is the concept of ‘the joy of giving’ so critical for fundraising now, and how do we recapture it, and bottle it up for our current donors?

In 1960 a 10 year old boy started a school newspaper, helped by some friends. He and his friends sold it in the playground for a penny a copy. They sold 100, and went on to produce it monthly. Buoyed by their success, the boy organised a jumble sale in the local church hall which raised £80. He sent the money to OXFAM. Some days later he received a letter, personally signed by the director of OXFAM. The boy was bowled over. Completely gob-smacked, in fact. As a result he went on to organise more activities for OXFAM, and eventually made fundraising his life’s work. All because that one letter made him experience the joy of giving. The letter I received (yes, the boy was me), over half a century ago, is shown below. 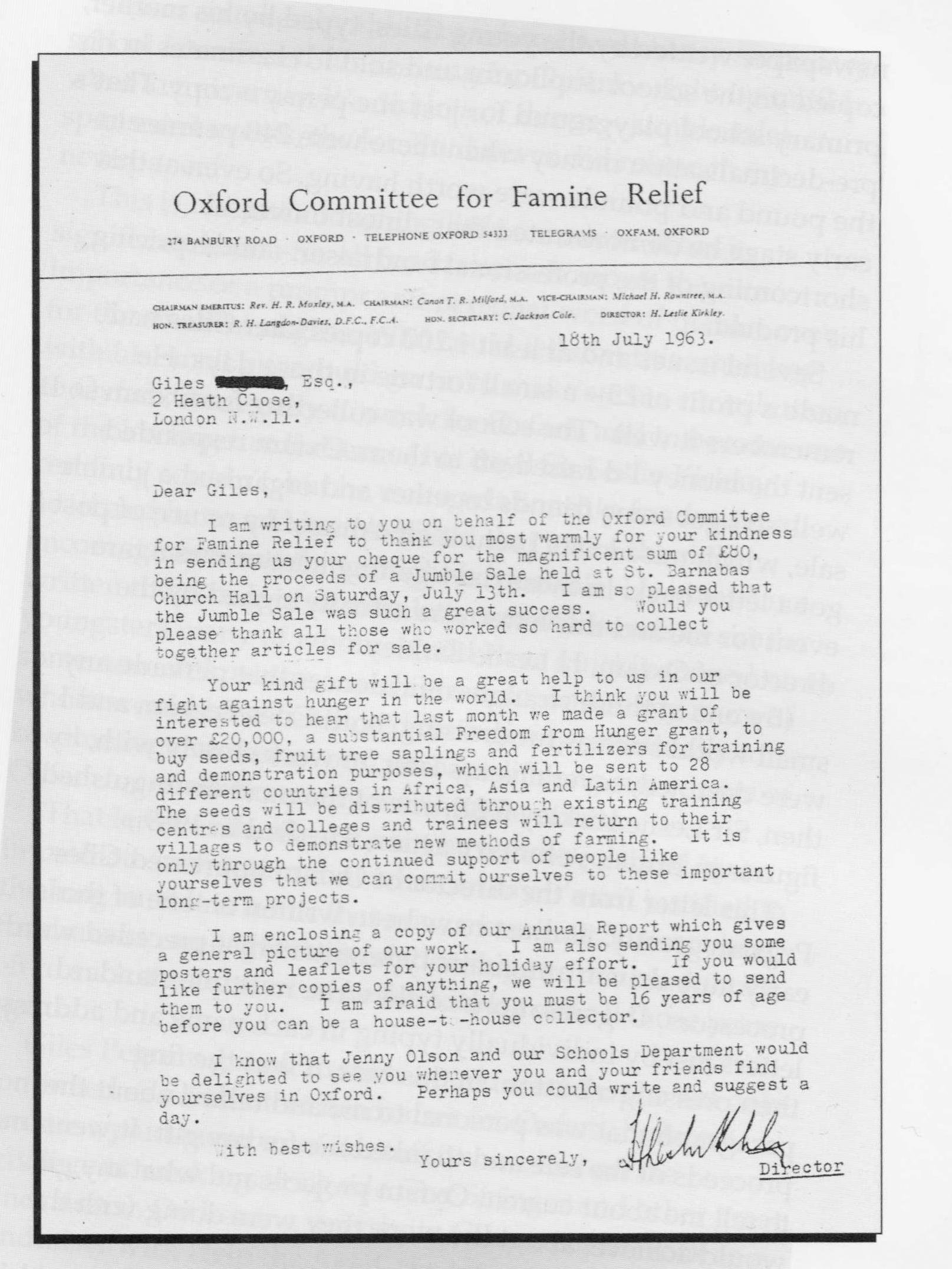 Given recent events, one could be forgiven for thinking the following:
– Nobody really wants to give.
– People who give do so because they are fundraised at, victims of a fundraising machine, cajoled or coerced.
– Most wish they could press the re-set button.
– Fundraisers are professional beggars, or worse, con-men (and women) who prey on the vulnerable. Not members of a noble profession.
– In all the reviews and reports on fundraising, little mention is made of the beneficiaries. The reason why charities, and fundraisers, exist.
– No-one talks about the joy of giving. Yes, joy.

We need to get to the heart of the matter. At the moment, the whole focus is negative. It’s all about things not to do. Processes, tick boxes, protocols, sanctions, rather than a focus on the joy of giving, something that is inherently positive.

I believe that in all this discussion we must remember that donors should experience that joy of giving. I’d suggest they will too if we do our job right. And we must if the donors are here to stay.

Let me give you an example. In the NSPCC’s Full Stop Appeal, (the largest ever appeal in Britain at the time, from one of its top charities) we already had systems for recognising most donors. We had recognition levels for donors who gave £2,000 and £10,000. They would be made Life Councillors/Life Patrons of the Society. They would have the right to vote at our AGM. They would, in front of 700 people, be presented with a certificate and a beautifully produced NSPCC badge.

Our Full Stop appeal gift table predicated that we would find 136 donors who would give £100,000+. (In fact, there were more than 136. £100,000 was a very popular gift level.) We worked hard to create a really special recognition programme for them.

They were given a certificate, and a gold-rimmed green Full Stop badge.

But the most important element was that we invited all Patrons to an annual get-together. We would spend quality time finding a good venue, such as the Locarno Suite at the Foreign Office, in Whitehall, in London’s West End. Time would be given for mingling. Then everyone was ushered into a smaller room, theatre style, where new patrons were introduced, we read a brief citation of how they had given £100,000 or more, (completing a sponsored event, organising a corporate adoption) and given their certificate and badge in front of an audience of their peers.

We were worried that existing patrons would be bored. We couldn’t have been more wrong. Existing patrons loved to see others join their ‘club’. For that is what they became. A club of people, who had made a really significant gift, meeting each other once a year and enjoying each other’s company.

I have seen a billionaire in tears as we read out the citations. One patron, (new money), worked very closely with another patron (old money) to fundraise. They were a formidable team. New money gave old money a Full Stop Badge, surrounded by diamonds. Priceless. Old money wore it proudly. How much more committed can you get?

There was a donor who gave £1m. Afterwards she said she was motivated to go to work in the morning so she could earn more money, and then give more money, and make more of a difference to children’s lives.

The entire process of identification, cultivation, attendance at events, project visits, project worker meetings, and so forth all led to a point where the prospect wrote a cheque for more than they expected and thought: ‘WOW, I’ve done something extraordinary’

The Olive Cooke story has become synonymous with all that is wrong with UK fundraising. But as well as being inundated with direct mail she sold poppies. Look at the photo here left. What do you see? A very happy lady, obviously, despite the recent furore, proud of what she was doing? Nobody coerced her. She experienced the joy of giving.

You don’t leave a legacy to a charity because you have been made to feel guilty. You do so because you want to make a lasting difference to the world after you have died. To feel the deep life-changing satisfaction that can come from leaving among your legacies a major, transformational gift that you could never, ever have imagined making in your lifetime. As you sign the will, you experience the joy of giving.

This is all about making the donor experience good, better, great, life-enhancing, WOW.

Many months before Olive Cooke, Etherington, Rob Wilson, the Daily Mail, et al, Ken Burnett and I felt that something should be done. We worked to make the ideas in Ken’s book, Relationship Fundraising a reality. Despite being published some twenty-five years ago, read by almost every fundraiser, the ideas have rarely been effectively implemented. We wanted to give people an easy-to-read handbook of what should be done differently; a compendium of the ideas generated through a Commission of twelve, with hundreds of inputs from donors, fundraisers and others with influence. So that we all know what we have to do to help our donors to experience the joy of giving.

Thus the Commission on the Donor Experience was born. You can read more here.

I hope the report that will form the Commission’s output will be something transformational and widely read, written about and talked about. An output that is practical and helps fundraisers, as well as others within charities, including trustees and CEOs, to understand what needs to be done differently to put the donor experience at the centre of our work. And that it will provide an altogether different focus to the one we have seen recently.

The result could change the face of fundraising. And give us all a better name; something to be proud of. We intend to see that it does.