Your annual report is more about your donor and your cause than about your organisation.

A brilliant annual report.   A very niche blog, but one that is written with passion.   How many annual reports are about the successes of the charity?

One young fundraiser has produced a report that is wholly about the beneficiary, and the donor who helps.   The charity is almost invisible.   Robin Peake deserves a medal.

All charities produce an annual report.

They are sent out to donors. Often they are thick and glossy. A charity turning over large sums should have an annual report that reflects this. Many charities produce an annual review as well. Still glossy.

The content is intended to impress. How much the charity has achieved. How many beneficiaries have been helped. In so many diverse and innovative ways.

How the finances have been managed. Growth on last year. The status of the reserves. The reduction of ‘overheads’.

How impressive the charity is.

The reports are impressive. But will they garner support? No.

I have seen one annual review that is seriously different. And has seriously impressed me. It is the work of a young, donor focussed fundraiser called Robin Peake.

Please take a couple of minutes to read it.

It is not the formal ‘Annual Report’. It does not contain page after page of incomprehensible figures. (That is produced for the Charity Commission and the small number of trusts that require it. 15 external copies. Only.) The sole public facing document is the Annual Review.

The front cover says: “Stories of hope. Written by you” Other than the logo and name of the organisation, that’s it.

The first page is the director’s report. Nothing unusual in that. But this one starts with two paragraphs on the work, focusing on the individual beneficiary, and then:

“And because of you…”. In the third paragraph, it positions donors at the heart, not the charity.

In a short director’s report, he mentions the donor: (“You”, “your”, “you generous supporters”), nine times.

There is nothing about the charity. Nothing.

At the risk of overstating this, it’s profound. It sets the tone for the whole review.

The introduction to the one side on finances starts: ”Thank you. Your generosity last year enabled…” Even in the techy part.

Every story of a beneficiary has, on the left hand side, a little story of a donor. “This story is made possible by Jim and Sandra from Northern Ireland, who give monthly to support young leaders in Central Asia.” Donors don’t just feel connected to the cause, they feel part of the cause. I don’t think I have ever seen this before.

Finally, on the back page: “In 2014, your support equipped…” The last word is a tribute to donors.

This review is 45% beneficiaries-45% donors-10% charity. I may have overestimated that last figure, at the expense of the other two.

Nothing on the importance of the charity.

No lists of statistics.

In fact, next to nothing on the charity apart from one simple side on the income and expenditure.

Nothing on the stature of the trustees.

No mention of what the charity has achieved. Just stories of what ‘you’ have achieved.

No balancing between the views of the chair of trustees, the CEO, the FD, the appeals director, the policy director , the services director, the communications director, the head of brand, the company secretary. One voice.

Just ten pages. Inexpensive, but well produced with lots of pictures and colour. Accessible and easy to read from cover to cover.

It is about connecting the donor with the beneficiary. No, it’s about bringing the cause and the donor together. It isn’t just about getting the charity out of the way. It’s about making the charity invisible The charity is the conduit. Totally donor focused. Sheer brilliance.

Am I over-egging the pudding? It might appear so, if you are used to conventional annual reports. This is not conventional, though it should be. No, I think this is an inevitable consequence of being donor-focussed. And should change the way we see annual reports.

In short, it is a report about what individual donors have achieved for individual beneficiaries.

Why do we find this difficult? It’s not rocket science.

It is totally different from every annual review I have seen. (Of course there are many I haven’t seen.) Large charities could learn a lot from this approach. If we preach relationship fundraising, let’s live it.

Yet, though many of us profess to being relationship fundraisers, we collude with a belief that the annual report should be about the charity, and its achievements. And we thank the donors that have supported the charity. The charity is at the centre, not the donor. Why do we (I include myself) go along with that? Is the annual report immune from donor-led thinking? 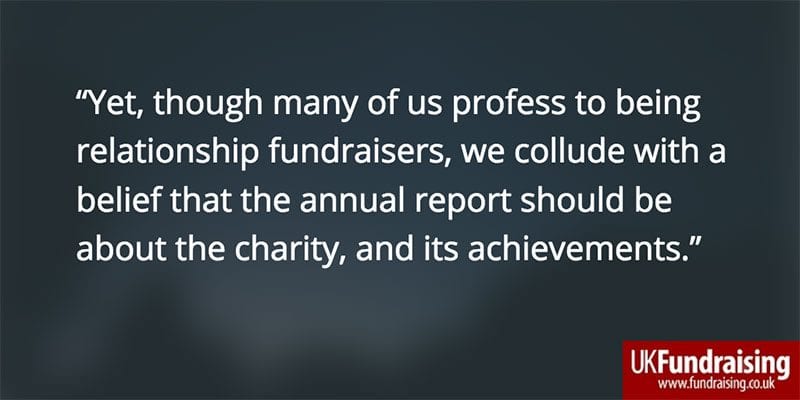 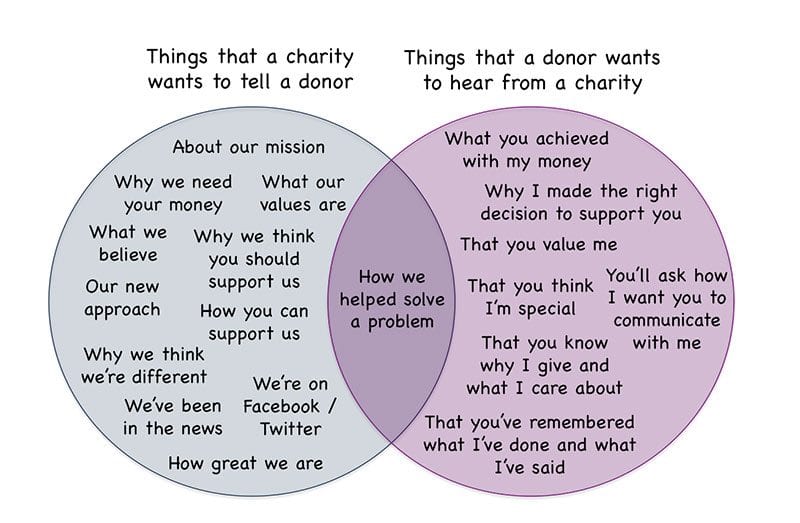 You still don’t know what the charity is. It doesn’t matter.

I’m sure Robin Peake will be embarrassed I wrote this. The review wasn’t forced. Let’s hope Robin is one of a new generation of fundraisers who do things differently. And give donors a better donor experience.